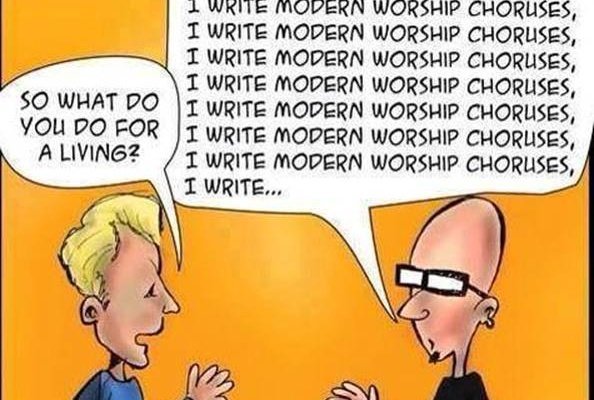 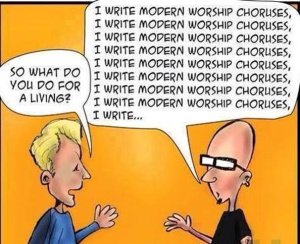 I am a contemporary musician. Most of my youth was spent in the folk/singer-songwriter genre … although I did play some bass and guitar in country-rock bands as a teenager, and in a Christian rock band called “Chrysalis” in early university years. The last 30 years has been a mix of genres, but when it comes right down to it, my best instrument is an acoustic guitar and my voice best suits folk music.

You’ll notice that I don’t claim to be a classical musician even though I took piano lessons for 8 years as a kid. And I am not a?student of “serious music” (as classical musicians often refer to their own genre). I do appreciate and listen to classical music of various periods. And as a Christian church leader, I am steeped in the older hymns of faith … especially Welsey’s hymns but also some of the great 19th and 20th century greats, Fanny Crosby et al.

But as I said, I am really a contemporary musician. Which is why it has frustrated me for years that there is so little congregational hymnody that is both contemporary/progressive musically AND lyrically. Instead we have an overload of songs that are progressive?musically but lyrically from the 18th Century … expounding on a?”penal substitutional atonement” theology and religious imperialism (conquer the world for Jesus!). In other words, lots of congregational songs that I like musically but can’t sing because I can’t subscribe to the theology of the lyrics.

Oh sure, there is a handful of wonderful musicians who have been writing songs for the last 40 years that are progressive?both musically and lyrically … Ron Klusmeier, Bruce Harding, Linnea Good, and Bryan Sirchio to name a few. And?I thought if I could make a musical contribution at this stage of my life, it would be to add a few more songs for worshipping communities that are progressive?both musically and theologically. Songs whose lyrics?are personal and communal, that speak of public justice as well as personal spirituality, that respect all world cultures, and are?inclusive of the varieties of our humanity.

So that is what I am working away at and what this web site is all about. Along with songs that are written just to be sung and heard, you will find on this web site some songs that I believe are suitable for congregational singing by progressive?believers. For those songs, my goal is to post lead sheets for use by church musicians or worship bands.