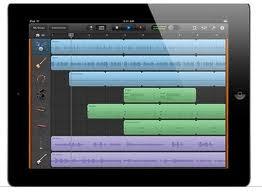 The technology that we now have at our disposal as musicians is amazing. When I first started recording as a teenager in?the 70s, I felt lucky to have a professional Sony reel-to-reel machine that had an SOS feature: Sound on Sound. This meant that I could record a single track on one side of the stereo tape, and then copy that track over to track 2 while dubbing input for the second track. This still left me with a mono recording, but it was overdubbed with a new layer of sound. The next step was to record the new track two (2 layers) back to track 1 while adding another take … which then created another layer … like having 3 tracks. I could take a couple of stabs at getting the current track right, but once I moved on the the next dub there was no going back because I was always recording over the next-to-last recording. ?I could do 4 or 5 takes, but by then the exponentially increasing?hissssss?was starting to overpower the music.

Jump forward just a few years to the iPad. Garage Band with virtual instruments that can be played with touch sensitivity, eight tracks plus some decent effects. Not a full blown studio, but compared to the old Sony SOS, what an amazing leap into the future.

Click here to listen to Eric Clapton’s?Wonderful Tonight?done entirely on the iPad with virtual instruments

(except for one guitar track, patched in with my iRig interface) and using only the build in iPad microphone for my voice.