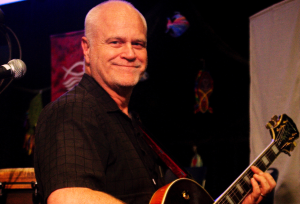 Music has always been at the core of my being. I started piano lessons when I was 7 years old. My parents bought me my first acoustic guitar when I was 12, and by the age of 13 I was playing in a band with some friends?? mostly at school dances and local fundraising events. I joined a high school church folk-singing group ? The Grace Youth Singers ? when I was in the 8th grade. They were desperate for a guitar/bass player so I got the job in spite of failing to meet the age requirement. I toured throughout eastern Canada with that group over the next few years ? from Winnipeg to Twillingate Newfoundland. This group introduced me to a spiritual life, and in part led to my choice to study theology and eventually become ordained by the United Church of Canada.

During my years in university, I was the singer/songwriter/keyboardist/guitarist for a Christian Rock Band ? Chrysalis ? ?which toured throughout eastern Ontario and Quebec. At the end of university I was settled to three congregations in northern Ontario, and music continued to be an important part of my ministry and my social life.

From?1997 – 2015 I was employed by the United Church in administrative roles, and for many of those years, my life as a musician diminished. But that is changing. In?August 2013, I started?playing guitar for the Kim Pollard Band. Kim is a talented singer/songwriter whose music could be described as ?spiritual but not religious.? The band competed in the International Blues Challenge in Memphis Tennessee in January, 2014. You can check out more about the band elsewhere on this site. A number of other opportunities began to emerge both in church settings and various other venues.

My focus now is on writing contemporary, pop-style songs for congregational singing that are inclusive and justice-seeking, and both personal and communal. I am also writing?some singer-songwriter type songs that tell stories or reflect on experiences and life through the lens of a progressive Christian faith.

Please enjoy exploring this site to learn more about my music and where I am performing or providing music leadership.